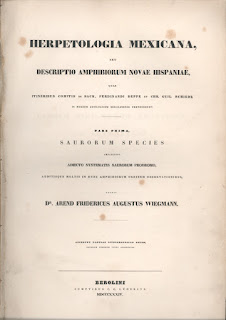 Herpetology Mexicana was the earliest significant post-Linnean treatise on the lizards and crocodilians of Mexico. The first 21 pages of the book details Wiegmann’s system of classification of the “Sauri,”– Lizards and Crocodiles. This section was initially published earlier in 1834 under the title “Systematis Saurorum Prodromus, e specimens herpetologiae Mexicanae primo seorsim edits.”

The second part of the book consists of Weigmann’s taxonomic treatment of the lizards and crocodiles of Mexico. Included are the descriptions of 32 new species of lizards, some of which had been briefly described earlier in Oken’s Isis. Descriptions of seven new genera are also given, including Heloderma.  All of the descriptions are based on specimens collected by Ferdinand Deppe and Count von Sack in the 1820s.

In 1969 the Society for the Study of Amphibians and Reptiles reprinted this work in a smaller format with black and white plates and an introduction by Edward H. Taylor — from which the information above can be found along with additional information about the collection and Wiegmann.

This book is one of the most difficult herpetological books to be found today with very few copies coming on the retail market in the last 60 years. In addition to it’s scarcity, This large folio (12.5’ x 18.75’ or 31.75 cm x 47.5 cm) book is especially appealing because of its taxonomic importance and the ten beautifully hand-colored lithograph plates.

The ten plates can be seen at: http://naturalhistorydecor.com/collections/reptile+illustrations 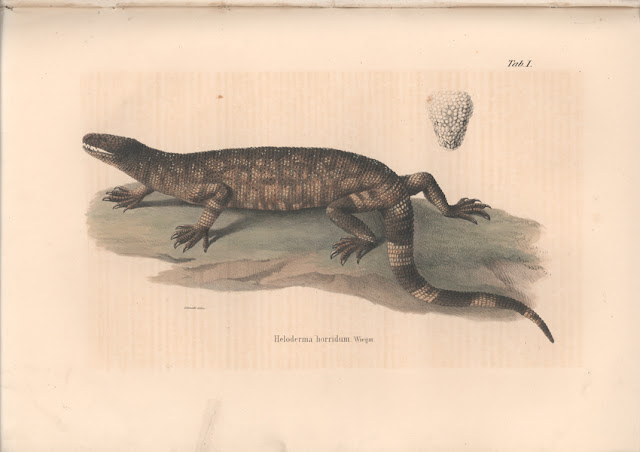 This book is available for sale at http://www.biblio.com/bookstore/breck-bartholomew-natural-history-books-salt-lake-city/amphibians-reptiles/36862167 - If it is not listed it has been sold.
Posted by Breck at 4:30 PM